“In all communities which maintain any pretence at civilisation and up-to-date methods, an efficient postal service is an absolute sine qua non.” — Confederate States of America: Government Postage Stamps (1913) by Frederick John Melville

Early in 1861, when his home state left the Union, John H. Reagan left the U.S. House of Representatives. Soon after, in Montgomery, Alabama, Reagan met with Jefferson Davis, the newly chosen President of the Confederacy, who persuaded him to accept the position of Postmaster General. Walking to his hotel after the meeting, Reagan wondered how he was going to create a postal system from scratch, when he saw Henry P. Brewster, “a lawyer of ability.” He later wrote, “I inquired of him if he was at leisure. He said he was. I asked him if he could go to Washington City for me. He said he could.”

The trains still ran north and south, and Reagan quickly wrote letters to key members of the U.S. Post Office, offering them jobs and asking them, if they accepted, to bring forms, maps and “all the information necessary to enable me to organize the postal service of the Confederacy.” In Washington, Mr. Brewster delivered the letters personally; all but two of the men accepted the offer. Before traveling south, they packed up account books, lists of postmasters, and whatever else they could put their hands on. Historian William C. Davis later wrote, “Reagan in effect had stolen the U.S. Post Office.”

On April 12, 1861, the shooting started. The next month, the U.S. post office suspended all mailing to the southern states. Anything addressed to the Confederacy went to the Dead Letter Office in Washington, D.C.

“The postal network’s bifurcation caused enormous private as well as institutional distress. There was now no mail service between the two warring Americas. Individuals and organizations alike were suddenly unable to reach friends and family, colleagues and customers, across strange new borders.” — How the Post Office Created America (2016) by Winifred Gallagher

“Meanwhile, the line between the North and the South kept changing. Sometimes, residents of Nashville got their mail from the Confederate post office; other times, they received letters via the northern one. It all depended on which army was occupying their town that week.” — Neither Snow Nor Rain: A History of the United States Postal Service (2016) by Devin Leonard

Many men fighting for the Confederacy, especially in the border states, came from places that were on the wrong side of the Union lines. Letters could not be sent home via the Confederate mails, and families could not write back via the U.S. Post Office. This problem was partially overcome by an “underground” mail service, i.e., smuggling. Volunteers, men and women, slipped through the lines on unfrequented roads and mountain paths, their pockets stuffed with letters. 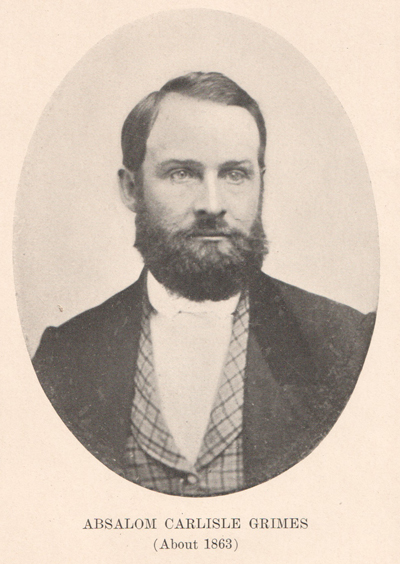 The most famous “mail runner” was Absalom Grimes of Missouri. In boyhood, he served as a telegraph messenger in St. Louis, and apparently had the urge to deliver messages in his DNA. In Absalom Grimes: Confederate Mail Runner, he described his first mail run:

“At this time I conceived the idea of gathering up all the letters I could and carrying them south to the Missouri boys in the army. With this in view I enlisted the aid of Mrs. Marion Wall Vail, Mrs. Deborah Wilson, Mrs. Lizzie Ivers, and Miss Lou Venable. They were to get all the letters they could while I went to the towns of Louisiana and Hannibal to gather letters…

“I left St. Louis on April 6, 1862, and went by rail to Centralia, Illinois, then via Cairo [Illinois] and Memphis [Tennessee] and reached Rienzi, Mississippi, about April 12, a few days after the Missouri regiments arrived there from Arkansas. The Rebel soldiers were about the happiest set of men in America when I delivered the letters, the first they had received since they had left their homes many months previous. In expressing their joy they said it was like having an angel drop down from heaven with glad tidings – only the wings were missing.”

During three days in camp, every soldier who could write penned letters for Grimes to carry back to Missouri. Then, like the Wise Men, Grimes returned to home by a different route. Back in St. Louis, he gave the letters to the women assisting him, and they traveled throughout  Missouri distributing them from town to town. For his next trip south, Grimes took a steamboat sixty miles down the Mississippi and then switched to a rowboat. Because there were Union troops at Cairo, Illinois, he had to take precautions.

“I landed and cut willow branches and placed them over the top of my boat in order to prevent the garrison at Cairo from firing on me. I planned to float down close to the west bank, across the river from the fort, but the current carried me far out into the stream and I dared not use my oars. When I was almost past the fort the soldiers must have suspected that the willows were something other than a floating tree for they began target practice on my boat. Several shots cut the willow and I was quite uneasy.”

Grimes survived that peril, but downriver his curiosity was his undoing. In a flooded forest in Osceola, Arkansas, he hid his carpetbag filled with mail in a hollow snag, and began snooping around the Union forces. Captured and returned to Cairo, he was imprisoned, escaped from prison, and stowed away on a steamboat, eventually passing through the Union lines and reaching the Confederate army at Corinth, Mississippi.

Grimes gathered up a new batch of soldiers’ letters and headed north, hiding under an overturned lifeboat when his steamer docked at Cairo. Safe again in St. Louis, he gave the letters to his corps of assistants for delivery throughout the state. He noted, “The lady distributors had their skirts made double in such a way that they could stow away more than a thousand letters. The hoop skirts and ruffled dresses were a most fortunate and convenient fashion at that time.”

As the women delivered letters from the soldiers, they gathered more letters for the soldiers and passed them on to Grimes. In one trip he could carry up to 3,000 letters. He once noted, “My underwear was lined from neck to heel with Rebel letters and I made an excuse to keep out of sight as much as possible.”

While carrying the mail, he was sheltered in the North by Rebel sympathizers, hid in a herd of cattle on a steamboat, crossed the lines in a stolen ambulance, assumed different names, passed from one safe house to another, and slipped through the Union blockade of Vicksburg with 2,000 letters for troops from Missouri and Kentucky.

In addition to carrying mail and stealing Union property, Grimes was also spying, and that carried a death sentence. There was a reward of $2,000 on his head, dead or alive. He broke out of three prisons and broke into another to rescue a friend, but was finally captured in Memphis and sent back to St. Louis. Tried and convicted, he was scheduled for execution. Shot twice during his last attempted prison break, Absalom Grimes was hospitalized and while recovering had his sentence commuted to imprisonment for the duration of the war. Ultimately, he was pardoned and ordered released by President Lincoln. The warden left the pardon on his desk and ordered Grimes to be flogged. Ten days later, a telegraph message from the President finally won Grime’s release, and he spent Christmas with Confederate sympathizers at a country home. There he narrowly escaped an attempted lynching by Union cavalrymen, who, learning Grimes had left the house earlier in the day, lynched another man instead.

Absalom Grimes spent the next 30 years as a riverboat pilot. He died in St. Louis in 1906.

“The Confederate Post Office Department” in Secession and the Civil War: Memoirs of John H. Reagan (1906)

The Confederate States Post-Office Department, Its Stamps & Stationery: A Record of Achievement (1950) by August Dietz

Neither Snow Nor Rain: A History of the United States Postal Service (2016) by Devin Leonard

How the Post Office Created America (2016) by Winifred Gallagher