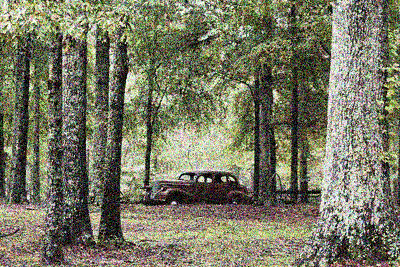 In dealing with the stuff of legend, not all can be explained as completely as one might like. But bring an open mind to this tale, and allow yourself to wonder.

When one thinks of the most challenging holes in golf, several come quickly to mind.

Of course, the 17th at TPC Sawgrass, with its “island green”  set in what looks like an inland sea. Or the 12th at Augusta, in the famed Amen Corner, thought by Jack Nicklaus to be the most difficult hole in tournament golf. The 16th at Cypress Point demands a 230-yard carry over the Pacific, a nightmare on a gusty day. And the 8th at Royal Troon Golf Club has a green so tiny it’s known as “The Postage Stamp.”

But can any match the little known, yet equally fearsome, Volaré Hole? Yes, No. 7 at Shawnee Country Club. No, not the one on the Delaware River, although that Shawnee’s Punchbowl Green at No. 9 is worthy of mention. Rather, look to the Niagara Triangle, that mysterious netherworld bounded by Niagara Falls, Lockport and North Tonawanda, N.Y., and in its center, the Shawnee Country Club in Cambria, or Sanborn, or Wheatfield… it’s a moving target, with no website, no email address; in fact, you may not be meant to find it at all.

A realtor, Robert W. Lorenz, bought the 84-acre May farm in 1963, and spent two years designing and building a 9-hole course. It was completed in 1965, and the next year, Lorenz was quoted as saying, “Some of these holes have people talking to themselves.”

That was just the beginning. At some point in the late 1970s, it was suggested that a Plymouth Volaré be driven out to the green of No. 7, and promised to the first person who could hit a hole-in-one there. But the car, even the suggestion of a car, began to exercise an odd hold over golfers, and refused to be won. And as one might imagine, as the summers wore on and the years passed by, the Volaré began to show its age. Should a ball leave the tee and roll into the cup at No. 7 without touching a club again, would this phantom car be driven away, or towed away?

Today, the Volaré continues to haunt the hole, a virtual prize, defying anyone to ace No. 7. You don’t have to take my word for it; should you find yourself on the Shawnee course at twilight on a summer evening, be still, listen for the strains of “Volare” sung by Sergio Franchi, and see, shimmering in the shadows, a golf trophy that refused to be won.

My thanks to Dennis Ryskalczyk and Kent Winship for sharing this haunting bit of folklore.