Today, hockey and polo are fairly distinct sports. No one confuses the two. But in the early days of both sports, especially between 1880 and 1900, it wasn’t so easy to sort things out.

In the beginning, “hockey” had nothing to do with ice. Also called “hookey” or “hawkey,” it was a centuries-old field game in England, played one-handed with a short stick that had a hooked end; the object was to move a ball through an opponent’s goal posts. In Scotland, it was called “shinty” or “shinny;” in Ireland, it was “hurling” (and older than recorded history). Until 1883 there were few rules as to the size of the field or the size of the teams, and penalties were generally of the “if you hit my shins, I’ll hit yours” nature.

In 1842, English traveler Godfrey Vigne watched polo in Tibet and described it, quite logically, as “hockey on horseback” – it was, after all, played on a field with two teams trying to push a ball with a stick through their opponent’s goal. The phrase “hockey on horseback” was used repeatedly over the next 30 years, until “polo,” from “pulu,” the Tibetan word for ball, was found to be shorter and more agreeable.

But the equine version of polo was not the only game to lay claim to the name. Polo came to the U.S. in 1876, and to Newport, R.I., not too long after that. Roller skating was already in vogue there, and by 1878 young men had reasoned that skates were cheaper than horses, and polo could be played indoors at a skating rink. They called it “polo,” because it was a ball game with sticks and a goal at either end of the playing field, just like the equine version. 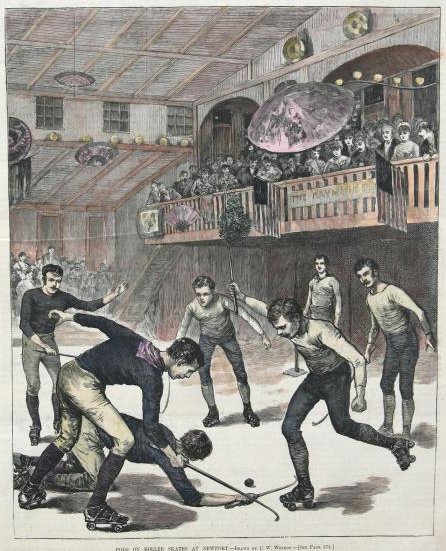 “Polo on Skates at Newport,” illustration by C.W. Weldon for Harper’s Weekly, September 8, 1882

In 1883, the New York Times reporter in Newport referred to both sports as “polo,” some times in the same article, until, perhaps prompted for a clarification, he began to describe the rink variety as “roller polo” or “polo on skates.”

In 1889, a writer for Appleton’s Cyclopedia wrote this about the two polo games:

“Polo proper can never become a popular sport in this country, as it is far too expensive to be indulged in except by the wealthy, and only by those of that class who excel as equestrians. On the other hand, what we may rightly call the American game of polo bids fair to out-rank all the older sports of its kind in the American public favor.”

Roller polo was very popular in New England, and in the winter it moved outdoors, where it became “ice polo,” played with the same ball, only on ice and ice skates. Some American colleges even had “ice polo” teams.

Earlier in the 1800s, as the English and Irish migrated to Canada, they brought field hockey and hurling with them, and given the weather, found themselves playing on frozen ground, and even frozen lakes. As early as 1810, emigrants were wearing skates and writing home about playing hockey or “hurley” on ice.

In time, the Canadians found a ball to be too skittish, and cut it in half so it had a flat side which slid across the ice, instead of bouncing. The first recorded use of a disk that was flat on two sides – a puck – was in Montreal in March 1875. And so hockey on ice, “ice hockey,” flourished.

In the U.S., roller polo rose and fell in popularity several times over the years between 1890 and 1920. Ice polo was supplanted when American players traveled to Canada in the 1890s and played ice hockey, which quickly came to be preferred as the better sport – with more speed and team strategy.

By 1920, both ice polo and roller polo had fallen into obscurity. And so the distinction between polo, of the pony sort, and hockey, of the icy sort, became clear.

“But what of water polo?” you might ask. That’s a similar tale. It was a game played with a ball, hence a “polo” game.

The game was developed in the late nineteenth century by William Wilson and first played in the River Dee in Aberdeen, Scotland. The game was a kind of “aquatic football” played with a ball of India rubber. This “water rugby” came to be called “water polo.” To deal with constant changes in rules, in 1888 the London Water Polo League was founded and drew up rules for team competition. The game is still called water polo, but there is no confusion in the mind of the public, at least not on that account.