My Most Favorite Incense Burner

I was in Syracuse, in my fraternity house at 115 College Place. I’d probably enjoyed a few beers, and was thus feeling unfettered by convention. On the kitchen wall, just to the right of the stove, was an old cast iron fire alarm box, connected to nothing. It had been painted over so many times that it was almost invisible. And I said, “I want that.”

And someone said, “Oh, if it’s still there, that means it can’t be moved, because many people would already have tried.” Now, the fastest way to get me to do something is to tell me that it can’t be done. And about five minutes later, the box was mine. Eventually, after applications of Zip-Strip, it was as you see it now, with the sedimentary layers of white paint and most of its original fire-engine red removed. 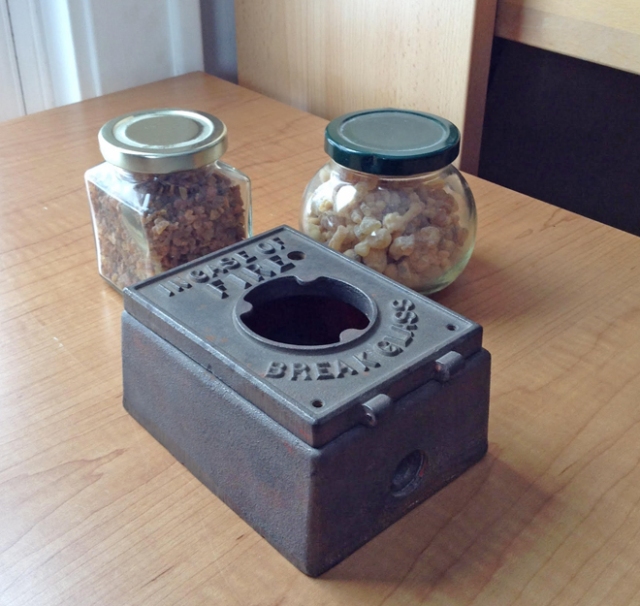 It made an ideal incense burner. The charcoal starter, purchased at the Dragon’s Emporium on South Beech Street, sat inside comfortably and when lit, made lovely smoke from the nuggets of frankincense and myrrh sprinkled on top.

However, it was only this week, some 50 years later, that I wondered how that box came to be on the kitchen wall, and how old it was when I liberated it. At the time, it never occurred to me that 115 College Place had ever been anything else than the Delt House. But, indeed, it had.

The house began its life as a vacant lot in the upscale “University Heights” neighborhood. In 1902, Andrew Herbert Pond exchanged a lot on Rich Street for land on a hill overlooking the Syracuse University campus. He built a grand house at 115 College Place, and by 1904 was at home with his wife, Harriet, and children, Robert and Ruth, along with a servant and a nurse.

Pond was a successful wholesale jeweler with an office in downtown Syracuse. He sailed to Europe to buy diamonds, summered in the Thousand Islands, wintered in Florida or Bermuda. His wife was a prominent clubwoman, hosting teas and meetings at their home. When Harriet’s parents were aged and ailing, she took them in. Her mother, Frances A. Beadel, died at 115 College Place in 1907 and her father, the Rev. Daniel Webster Beadel, in 1912. Both of their funerals were held at home.

But by 1925, the University Heights neighborhood was losing its cachet. The University was growing, automobiles were bringing it ever closer to the city, and its stately homes were being turned into student cottages, fraternity and sorority houses. Andrew Pond sold 115 College Place and bought the home of Hawley Van Swall at 1416 James Street, a step up in both society and real estate.

The A.H. Pond Company continued to thrive and in 1930 introduced the Keepsake line of diamond rings. Andrew Pond was widowed that year, and in 1938 died at home on James Street.

The house at 115 College Place, meanwhile, having passed from the Pond family, began a long journey as a residence for S.U. students. (It was probably at this time that the fire alarm system was installed. There is no manufacturer’s mark on the box, but judging from the typography, it was probably a Stanley & Patterson alarm.)

In the late 1920s, 115 College Place housed upperclass co-eds. For a time, it was known as Beach Cottage, named for Allen Beach, an S.U. Board of Trustees member from 1870 to 1872. In 1934 and ’35, the house was the chapter house of Delta Zeta sorority, who hosted a Venetian Ball and a Spring Formal before vanishing into history.

In 1937, the house was renamed Stiles Cottage, for Henry William Stiles, class of 1910, a professor of anatomy. It again housed co-eds, who on one occasion held a Halloween Party for the men of the neighboring Phi Kappa Psi fraternity.

In 1939, the police were called to 115 College Place to investigate a burglary reported by Marjorie Smith, assistant dean of women. A window screen was removed and the window opened, but the police concluded it was an inside job: a co-ed opened the window to violate curfew. Smith insisted the police dust for fingerprints, but the co-ed left no prints, and escaped detection.

In 1942, students were moved out to accommodate 20 WAACs coming to Syracuse to work for the Aircraft Warning service, a WWII organization for continental air defense. The service was disbanded in 1944, and the cottage returned to co-ed student use.

In 1949, 115 College Place became the home of Delta Tau Delta fraternity. Notably that year, the chapter hosted the Rev. Henry Hitt Crane of Detroit, Michigan, who was in Syracuse to speak on brotherhood at Hendricks Chapel. A dinner at the house included guests Chancellor William P. Tolley; Dr. Charles Noble, dean of the chapel; Rabbi William Schwartz; the Rev. Gannon Ryan; Leonard Millner, president of the Jewish fellowship; and the presidents of the six Jewish fraternities on the Hill. 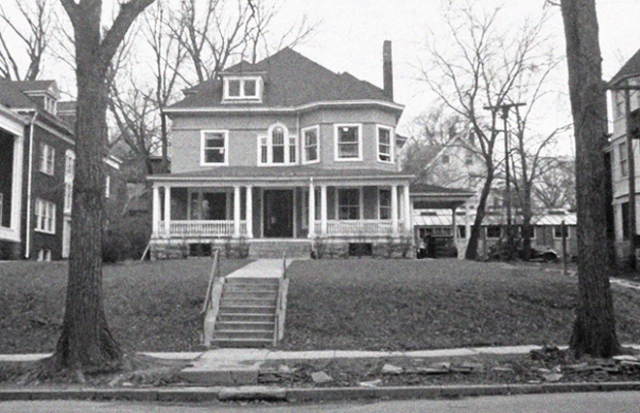 In January of 1966, I moved into the Delt House during the Blizzard of ’66, and in June of 1968, I graduated from Syracuse University. I spent the summer of ’68 living in the house, teaching at Croton Elementary School, and then, in September, I disappeared into the U.S.A.F.

In January of 1971, the brothers of Delta Tau Delta moved into the former Sigma Nu house at 801 Walnut, and the house at 115 College Place was eventually torn down to make room for the CASE Center, today the Center for Science and Technology. I was working at Bird Library during the house’s demolition, and I remember seeing its skeleton, half standing, bare walls and stairs going nowhere, and then, the next day, nothing.

The site today is a lawn across the street from Slocum Hall. All of the neighboring houses – Jewell Cottage on one side and Phi Kappa Psi, Tau Kappa Epsilon, Kappa Sigma on the other – have been torn down. Only Psi Upsilon, at the end of the block, remains. 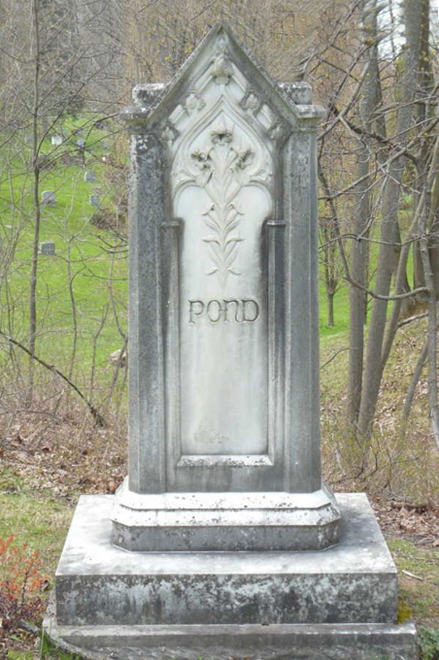 The earthly remains of the Pond family lie in Oakwood Cemetery, survived by the fire alarm box from 115 College Place.