The Cyclone was one of three coasters designed and built by Harry G. Traver, and was variously described as “the thrill of thrills,” “revered and feared,” “sheer viciousness,” “sadistic” and “brutal.” The Cyclone placed more than 4 Gs on riders and approached 60 mph over a twisted curves and steep, angled drops. There were no brake runs outside of the station as there were no level portions of track where brakes could be placed.

One writer described the ride: “After what has been called the ‘best first drop, ever,’ a horrifically steep, twisting plunge, the train rocketed back to the opposite end of the structure for a 600 degree double helix, an angry knot of neck-snapping turns. Yet another steep drop led into the ride’s final element, a figure-eight so intense the track was banked about 75 degrees.” The ride time was about 40 seconds. 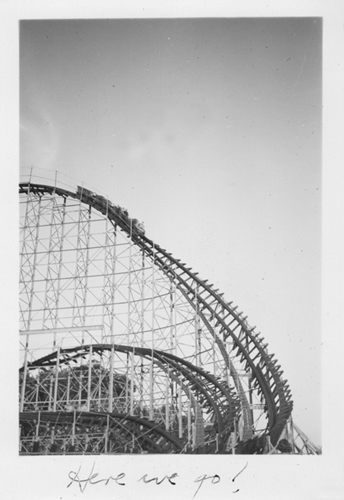 On May 31, 1938, a few months before my father took these photos, 22-year-old Amos Weidrich apparently stood up during the ride to take off his suit coat, and was tossed from the second incline, falling 45 feet onto the tracks below; the car he had just left ran over him, cutting off his head and feet.

This, however, did not dissuade thrill seekers to come. My mother’s sister, my aunt Rhea, loved the Cyclone, especially when it began to sprinkle. She would run to the ride just before it was closed for rain. “It was faster when the rails were wet,” she told me, grinning.