I can’t help but think that Maud Allan would have been better off with a few cast changes in the play that was her life.

Born Beulah Maude Durrant in Toronto in 1873, she spent her childhood in San Francisco before traveling to Germany at age 22 to study piano. While she was away, her brother, Theodore Durrant, strangled and mutilated two young women at the Emanuel Baptist Church, hiding one body in the church’s belfry and stuffing the other corpse into a closet. The San Francisco trial of “The Demon of the Belfry” gained nationwide notoriety and Theodore was hung for the crimes. To escape the unwanted fame, Beulah Durrant took the name “Maud Allan.”

She also chose to give up her career as a pianist for one as a self-taught interpretive dancer, basing her dancing on natural movement in response to music. In Vienna in 1906, she debuted her own production of “Vision of Salomé,” with a score by Belgian composer Marcel Rémy.

Although “Vision of Salomé” stemmed from a Biblical story, it was not what you would call a religious play. In the Bible, King Herod’s step-daughter danced for him and he was so taken by her performance that he promised her anything she desired. Her mother, the king’s wife, told her to ask for the head of John the Baptist on a platter. The king was holding John as a prisoner but had no intention of executing him. But he could not go back on his word, and so ordered John’s head removed and plated.

Maud Adam’s “Salomé” costume, which she designed herself, delighted many and shocked others. Some people were so offended that they saw the show twice, to get the details right for their letters to the editor. The brevity of the outfit, combined with Miss Allan’s barefoot twirling, held audiences spellbound.

Moving to England in 1908, Allan gave 265 performances of “Vision of Salomé” in one year, packing the seats and aisles of London’s 1700-seat Palace Theatre from March through November, commanding £500 a week. Postcards of Miss Allan sold by the thousands. A reporter for the New York Sun, writing from London, calmly described the classical pieces Allan performed early in her program, but shifted into another gear for her entrance as Salomé:

“Her hair is now black, Orientally arranged and surmounted by a headdress of Eastern fashion. Her breast shows the circular plates seen in pictures of Amazons. Across the front of the torso swing two or three pendants. From a waistband supported by the hips hangs a skirt of some black gauze. Just below the waist is some sort of undergarment of the kind usually worn by ballet dancers when they appear in tights.

“But this dancer does not wear tights. Neither above or below does she wear them. Except for the articles mentioned she is absolutely naked, body and limbs. This is no dance of the seven veils. It is a dance of only one veil, and not much of a veil at that. She does not take it off. She does not need to.”

But he saved his best prose for the appearance of the head of John the Baptist:

“She sees it and folds up like a recoiling serpent. Then she unwinds and creeps toward it, she hesitates, she throbs, she turns away, she approaches again and finally pounces upon the head and carries it toward the footlights. There she goes into a spasm of physical raptures over it…

“Suddenly the dancer springs to her full height and swinging the head at arm’s length brings it above her face. Then she suddenly drops the white lips upon her own and for a moment seems to drink obscene kisses from them as from the brim of a cup. Then follows a writhing revulsion. She puts the head behind her, hides her face with one arm and creeps back toward the pedestal. In another moment she drops it behind the pedestal and falls shuddering to her knees.

“Again she rises, this time slowly. Her whole nude figure quivers. She writhes and worms her way across the stage.  She wreathes fantastic figures with her arms, her legs, her gleaming body. She staggers, she reels, she falls, a shining mass in the pallid moonlight.”

But Allan was growing weary of being known as “the Salomé dancer” and in 1911 commissioned Claude Debussy to write a score for a new dance-play: “Khamma” was to have an Egyptian theme, with a young woman dancing before a stone god, beseeching the deity to protect her city from an army at the gates. Debussy worked on the score but the collaboration was not a happy one; Allan was often on tour (she played Russia, South Africa, India, China, Japan, Australia, New Zealand, Canada, Chile, Peru and Argentina) and when she was back in Europe she was not happy with Debussy, nor he with her. She lost interest in “Khamma” and instead developed a new work, “Nair, the Slave,” with music by Enrico Belpassi. (The Debussy score was performed with other dancers in 1947, and survives in piano and orchestral versions.)

In 1915, while in California, Allan starred in a silent film, The Rug Maker’s Daughter, which included three of her dances, but no copy survives. 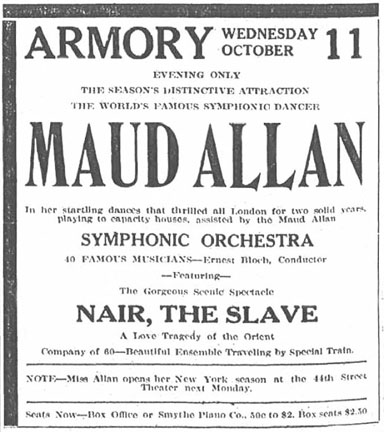 In 1916, Allan was set to tour the U.S. with Ernest Bloch conducting her 40-piece orchestra. Among the dances she planned to perform were her interpretations of Strauss’ “Blue Danube,” Schubert’s “Ave Maria,” Grieg’s “Peer Gynt,” Rubenstein’s “Valse Caprise,” Mendelssohn’s “Spring Song,” a cycle of Chopin’s preludes arranged by Bloch, and the finale, “Nair, the Slave.” The tour began with well-reviewed appearances in New York, Albany, Ithaca and Binghamton, with newspapers praising Miss Allan, her dancers, the elaborate sets and her orchestra. However, the initial investment was too great, attendance too low, and the company went broke in Ohio, stranding Bloch and the others.

In 1917, Allan was reduced to playing vaudeville. She returned to England in 1918, and, perhaps to relive her glory days, gave two private performances of the “Vision of Salomé” for her admirers.

Having “The Demon of the Belfry” as a brother was a bad break, and now Allan caught the eye of another whack job: Noel Pemberton-Billing, an English MP and a self-motivated reformer who had been libeling England’s powerful and famous hoping to provoke court cases so he could command attention and proclaim his views.

Pemberton-Billing published his own magazine, The Imperialist, later re-titled The Vigilante, wherein he published the writings of Arnold Henry White and Capt. Harold Sherwood Spencer (the latter recently discharged from the British Army as mentally unstable). In a nutshell, Pemberton-Billing, White and Spencer believed that Germans, Jews, Communists and homosexuals were in league to bring about Britain’s defeat in World War I by weakening the nation’s will and moral fiber. For example:

“The German, through his efficient and clever agent, the Ashkenazim, has complete control of the White Slave Traffic. Germany has found that diseased women cause more casualties than bullets. Controlled by their Jew-agents, Germany maintains in Britain a self-supporting – even profit-making – army of prostitutes which put more men out of action than does their army of soldiers.”

“There exists in the Cabinet Noir of a certain German Prince a book compiled by the Secret Service from reports of German agents who have infested this country for the past twenty years, agents so vile and spreading such debauchery and such lasciviousness as only German minds can conceive and only German bodies execute.”

Spencer claimed that the “Berlin Black Book” named 47,000 (!) British perverts who were being blackmailed by the Germans into giving up military secrets and weakening the war effort. And Spencer knew the document existed because he had been told about it by Prince William of Albania in 1914.

“It is a most catholic miscellany. The names of Privy Councilors, youths of the chorus, wives of Cabinet Ministers, dancing girls, even Cabinet Ministers themselves, while diplomats, poets, bankers, editors, newspaper proprietors, members of His Majesty’s Household follow each other with no order of precedence.”

Not content with the 47,000 existing British perverts, Germany was hard at work to create new ones:

“Meretricious agents of the Kaiser were stationed at such places as Marble Arch and Hyde Park Corner. In this black book of sin, details were given of the unnatural defloration of children… wives of men in supreme positions were entangled. In Lesbian ecstasy the most sacred secrets of the state were threatened.”

In “Lesbian ecstasy” indeed. Pemberton-Billing claimed that Margot Asquith, wife of former Prime Minister Herbert Asquith, was a lesbian and a German spy. And in an article entitled “The Cult of the Clitoris” (what a way he had with words), he said that one of Margot’s lovers was Maud Allan, who had years before been a luncheon guest at 10 Downing Street and had recently performed sex acts on stage as Salomé.

Maud Allan took the bait and sued for libel. Pemberton-Billing reveled in his new forum, defended himself and coached his witnesses in lies. His star witness, Eileen Villiers-Stewart, when told to vacate the witness box, informed the courtroom that the trial judge, Charles Darling, was also listed among the 47,000 perverts.

Pemberton-Billing also told jurors that Maud Allan’s brother was a murderer, and suggested that Miss Allan’s dancing with the head of John the Baptist mirrored her brother’s behavior with the corpses of his victims. So there.

The jury bought it and rolled in it. Noel Pemberton-Billing won. Maud Allan lost. Basil Thomson, who as head of Britain’s Special Branch was responsible for catching real German spies, wrote in his diary, “Everyone concerned appeared to have been either insane or to have behaved as if he were.”

The victors, however, had little time to celebrate. England and its allies won the war and conspiracy theories suddenly looked silly. Harold Spencer was sent to jail for libeling another public figure, and striped of his army rank; after his release he was arrested again for “disgusting behavior.”  Under oath while being tried for bigamy, Eileen Villiers-Stewart admitted she lied in the Maud Allan case, and then went to jail for being married to two men at the same time, about which she had also lied. Exposed as a perjurer and a fraud, Pemberton-Billing slunk out of Parliament, citing “ill health.”

Allan resumed her career, but her popularity waned. For a time, she lived in Holford House in Regent’s Park, London, with Verna Aldrich, her secretary and, some say, lover. Maud Allan eventually moved back to California, and gave her last performance in Los Angeles in 1936. An automobile accident in 1938, in Pasadena, ended her dancing career, but she continued to teach dance. She returned to London for a time, and served as an ambulance driver during the Blitz, before returning to California in August of 1941; one account notes that she worked as a draftswoman for Douglas Aircraft in Long Beach. She died October 7, 1956, in Los Angeles. 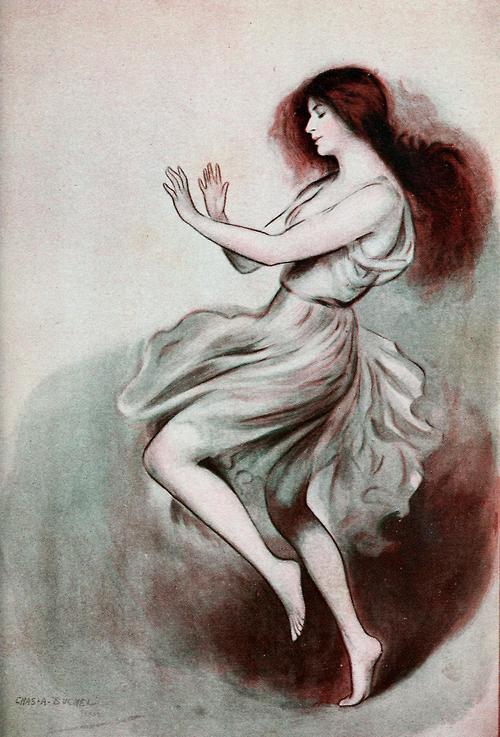 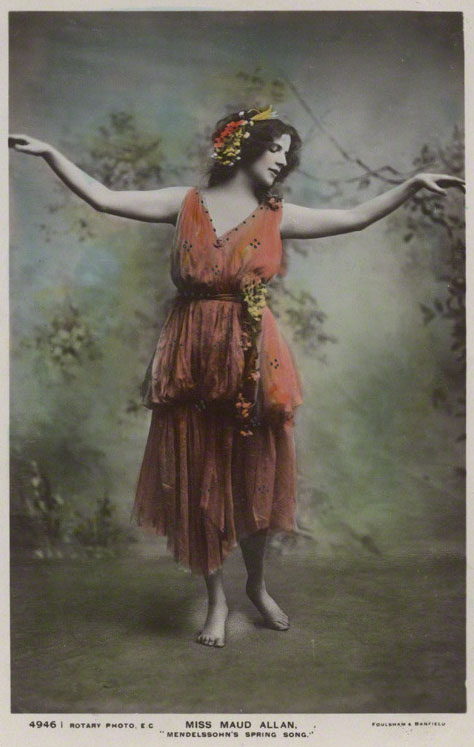 Postcard of Maud Allan in costume for “Spring Song” 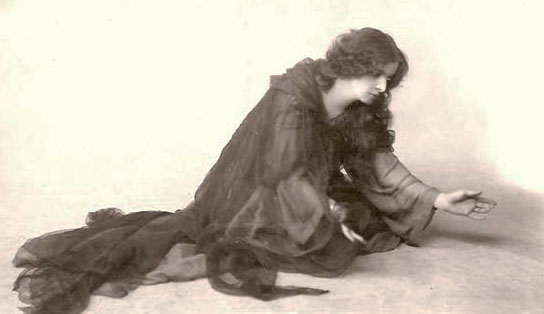 Postcard of Maud Allan in costume for Chopin’s “Marche funèbre” 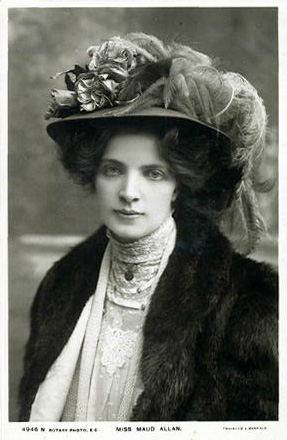 A complete list of Maud Allan’s works and many more images can be found at Dance Collection Danse.