On a Painting that Might Be R.G. Shaw II 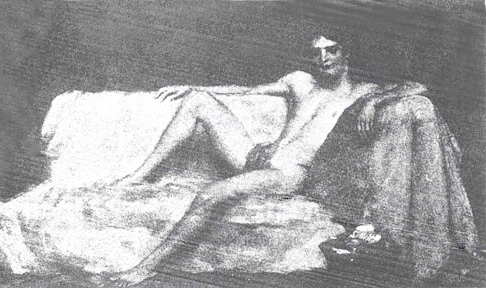 The following story is repeated, with the photo above, many times on the Internet:

“Artist R.G. Harper Pennington in one of his paintings depicted a nude Robert Gould Shaw II as the character ‘Little Billee’ from the bohemian novel Trilby by George du Maurier. This painting hung in the bedroom of Henry Symes Lehr, the homosexual husband of Elizabeth Wharton Drexel.”

This has troubled me for a number of reasons, the first being that Little Billee never poses in the nude in George du Maurier’s Trilby.  In the 1894 novel, it is the title character, a young woman named Trilby O’Ferrall, who poses nude for artists, which horrifies the sensitive and morally upright Little Billee. “He was young and tender, was Little Billee,” Du Maurier tells us, “he had never been to any school, and was innocent of the world and its wicked ways.” Little Billee was in fact shocked, and fled, when he discovered Miss O’Ferrall posing nude for artists. So, Little Billee nude?

Secondly, we are told the Shaw/Pennington painting hung in Harry Lehr’s bedroom. Elizabeth Wharton Drexel Lehr wrote two autobiographical books – “King Lehr” and the Gilded Age (1935) and Turn of the World (1937) – but neither book includes any reference to Harper Pennington, R.G. Shaw II or “Little Billee.”

However, Michael Henry Adams, writer and historian, was kind enough to contact me with more information on this. Mrs. Lehr’s first book was serialized in Town & Country magazine, beginning in March of 1935. Mr. Adams recalls that in an interview that accompanied the serialization, Mrs. Lehr mentioned the painting of Little Billee that hung in her husband’s bedroom, and the painting, photographed in black & white, accompanied the article. My thanks to Mr. Adams, a gentleman and a scholar, for this clue.

I am still searching for a reference, outside of the one above, to Pennington painting Shaw, or Shaw posing for Pennington.

On page 55 of King Lehr, Mrs. Lehr did note this of her husband and his bed chamber:

“He always longed for the picturesque clothes of the Middle Ages – for the lace ruffles and jewels of the French courtiers. Over his bed always hung the picture of the Duc de Joyeuse, the famous ‘mignon’ of Henri III of France.”

A portrait of Anne de Joyeuse

Joyeuse was a royal favorite and one of Les Mignons (French for “the darlings” or “the dainty ones”), a group of courtiers who wore their hair long and curled, and sported little bonnets of velvet, ruffled collars, rings, earrings, and makeup. As Harry Lehr enjoyed dressing in women’s clothes and appearing as a woman in entertainments, in his native Baltimore and at Newport, his affinity for the Duc de Joyeuse comes as no surprise. 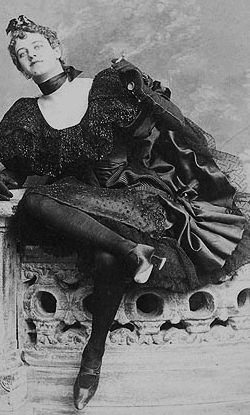 Harry Lehr, who was exceptionally proud of his legs

While I search for more documentation, I have to say that the story is believable.

If the actual model for the painting was Robert Gould Shaw II, he was within character when he posed. Wealthy and dissolute, he kept a mistress while at Harvard, and left her only briefly to marry the wealthy Nancy Langhorne. She was repelled by Shaw and bolted after three days. Given a shove by her family, she returned, but later claimed that she never knowingly had sex with Shaw, however she did recall his coming into her bedroom one night with a rag soaked in chloroform, which explained the birth of their son. Shaw, meanwhile, went back to his mistress, and even married her, without divorcing Nancy. When Shaw’s father realized his son could be jailed for bigamy, he begged Nancy to divorce the wastrel. She agreed, and Shaw married his mistress a second time, pretending it was the first time. Most accounts note that he drank heavily during this chapter of his life, and for most of the other chapters as well. And given that the model’s relaxed pose goes well beyond a loosened tie, one can imagine Shaw being fortified on this occasion as well.

And certainly, Harry Lehr was a candidate for a male nude in his bedroom. On his wedding night, as recounted by his bride in King Lehr, he told his wife that women repelled him and that she, in particular, really repelled him; he had married her for her money and they would never share a bed. He was not like other men; the door between their bedrooms was to remain locked, and so, goodnight.

We can also be sure that Lehr and Pennington knew one another; they were both members of high society, summered at Newport and attended many of the same parties in New York. One can easily see Lehr buying the painting with his wife’s money.

And now, two more “if’s.” If Pennington painted the picture, and if it was actually titled “Little Billee,” I can suggest a reason why. It starts with another artist, James McNeill Whistler, who Pennington idolized. Whistler was young Pennington’s mentor and his hero, and when Trilby was first published, serialized in Harper’s Magazine in 1894, it contained a character, Joe Sibley, who was Whistler through and through, and not Whistler on his best day. Whistler was stung and furious with George Du Maurier, and let both Du Maurier and Harper’s Magazine know it.

“Decidedly, dear Jimmy, our ‘friend’ Dumaurier is lacking in taste. Of course I read ‘Trilby’ as it came out, & had a real ‘turn’ when I ran across some of the personalities which the author has dropped in… but, later, as, one by one, real, living persons were described – for no earthly reason that I can see, as far as the story is concerned – I felt that the joke had gone much too far.”

Whistler got some satisfaction when Du Maurier and Harper’s agreed to remove all traces of Joe Sibley from the book before its hardcover publication, but perhaps Pennington decided to get in a lick as well. What better way to get back at Du Maurier, and play up to Whistler, than to undress Du Maurier’s tender and sensitive hero, paint him lounging lasciviously in the nude, and tell the world that this was Little Billee?

Or, another possible explanation: Perhaps the character from Trilby that Pennington portrayed was not Little Billee, but rather his fellow artist Talbot “Taffy” Wynne. Note the similarity in pose between Pennington’s painting of Shaw (above) and George Du Maurier’s sketch of Taffy from the serialized version of Trilby, and the relevant quotation: 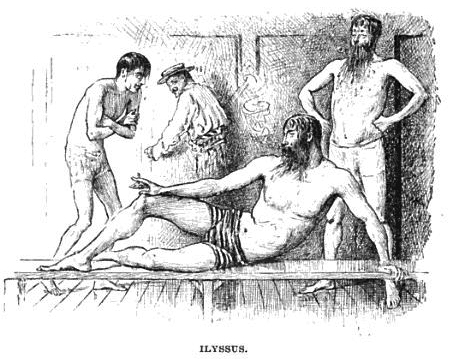 “I have also, like Svengali, seen Taffy ‘trying to get himself clean,’ either at home, or in the swimming-baths of the Seine; and never a sitting woman among them all could match for grace or finish or splendor of outward form that mighty Yorkshireman sitting in his tub, or sunning himself, like Ilyssus, at the Bains Henri Quartre…”

And below, the original image to which Du Maurier refers, a sculpture of the river god Ilissos, from the Parthenon:

Perhaps the painting wasn’t a jest at all. What if Mrs. Lehr just confused the characters?

The Shaw/Pennington painting, we are told, again without a source, was “almost certainly destroyed.” That makes sense. Lehr died many years before his wife, in 1929, and one can’t imagine his widow hanging on to the painting for old time’s sake.

If someone out there can document any more of this, I’d be grateful. It’s a good story, but there are so many “if’s.”