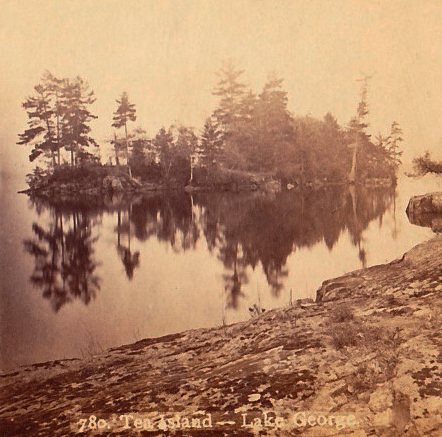 I love Lake George, islands and tea, so it was inevitable that I write something about Tea Island. The southernmost island in the lake, it has agreeably posed for many photographers. One of the best known is Seneca Ray Stoddard, who in his Lake George; A Book of To-day (1883) writes:

“Tea Island is a perfect little gem, a trifle over one mile from Caldwell [today’s Lake George Village], somewhat resembling the crater of an extinct volcano, with the rim broken away on the east side, allowing the water to flow in and out, forming a beautiful harbor in miniature.”

Stoddard also shares the two legends about the island. The First dates from the French & Indian War: In the summer of 1758, a British General named James Abercrombie led 15,000 men north to attack the French, but first buried the expedition’s working capital on Tea Island, for safekeeping. The attack was a disaster, 2,000 men killed or wounded, and the survivors came running and paddling back the way they came, with undignified haste, fleeing to their fortified camp south of the lake. The men who buried the treasure were either in no mood to stop for it or very dead on the field of battle, and so the treasure remained buried. (Another account claims the treasure was planted by French General Louis-Joseph Montcalm when he was besieging Fort William Henry the previous summer, in 1757. Take your pick.) 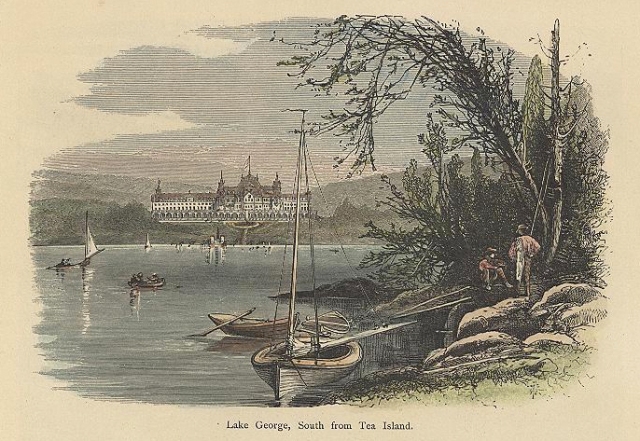 The second legend is, to my mind, much more believable. It is said that the small harbor was once an entrance to a tunnel that went all the way to China, where one could buy tea and bring it back without paying customs duties. This could be the origin of the name, but for those with less imagination, we do know that around 1828 someone built a small tea house on the island so that guests at the hotels could enjoy a short excursion on the water, have a cup of tea, and then return refreshed to the village. 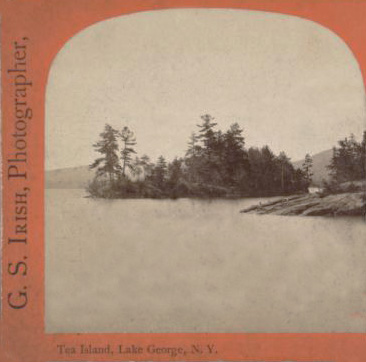 Stoddard was not the first to write about Tea Island. This is from a guidebook, The Northern Traveller and Northern Tour (1831):

“Tea Island, about 2 miles down the lake, is another favourite retreat. The little bay in which the boats land is remarkably retired and beautiful, and there is an old hut standing which affords something of a shelter.” 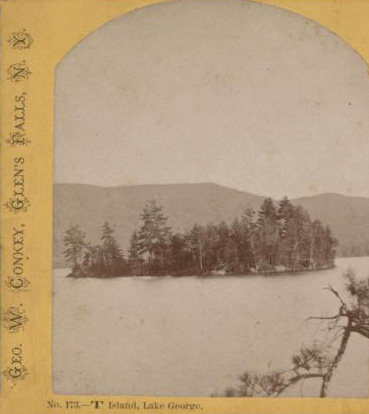 And this just three years later from the American Magazine of Useful and Entertaining Knowledge, September 1834:

“Tea Island, near the western shore, is a great curiosity. The exterior line is nearly a circle. A small opening, near the eastern shore, receives the water, which spreads within and covers nearly one third of the surface. A handsome summer house has been erected here for tea parties.”

In her Retrospect of Western Travel (1838), British writer Harriet Martineau spent a little more time on the island and on her description:

“First we went to Tea Island. I wish it had a better name; for it is a delicious spot, just big enough for a very lazy hermit to live in. There is a tea-house to look out from, and, far better, a few little reposing places on the margin,—recesses of rock and dry roots of trees, made to hide one’s self in for thought and dreaming. We dispersed; and one of us might have been seen, by anyone who rowed round the island, perched in every nook. The breezy side was cool and musical with the waves. The other side was warm as July, and the waters so still that the cypress twigs we threw in seemed as if they did not mean to float away. Our boatman laid himself down to sleep, as a matter of course; this bearing testimony to the charms of the island; for he evidently took for granted that we should stay some time. We allowed him a long nap, and then steered out course to Diamond Island. This gay handful of earth is not so beautiful as Tea Island, not being so well tufted with wood.” 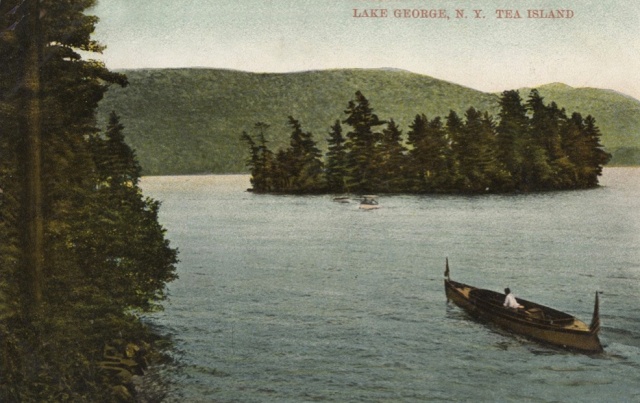 In 1853, Henry Marvin made an unexpected comparison:

“The first island we pass is Tea Island, near the west shore one mile from the head of the lake. It is a beautiful and romantic isle, with a harbor resembling in miniature, the counter-part of Havana.” 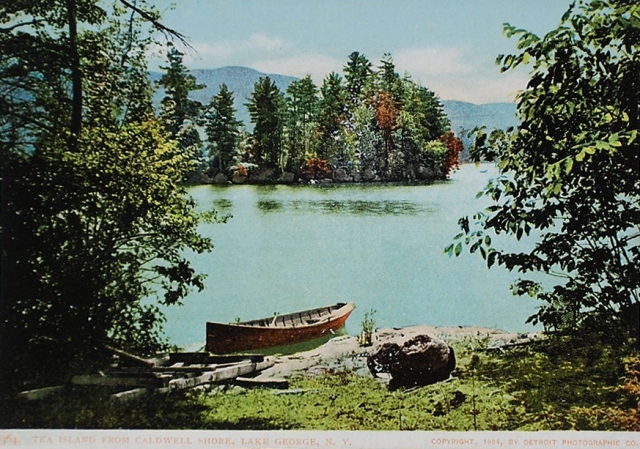 In the late 1800s, the Edward Stieglitz family purchased a summer home nearby on the western shore, and the owners’ son, Alfred Stieglitz, took many photos, including this one of his wife, Emmeline, enjoying the quiet. 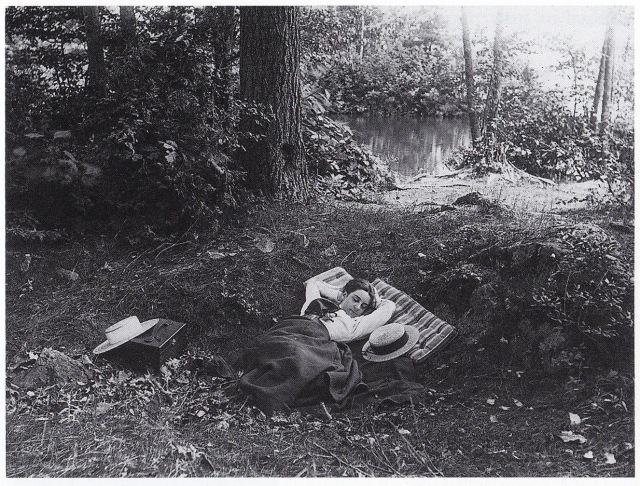 Emmy on Tea Island at Lake George by Alfred Stieglitz, circa 1893 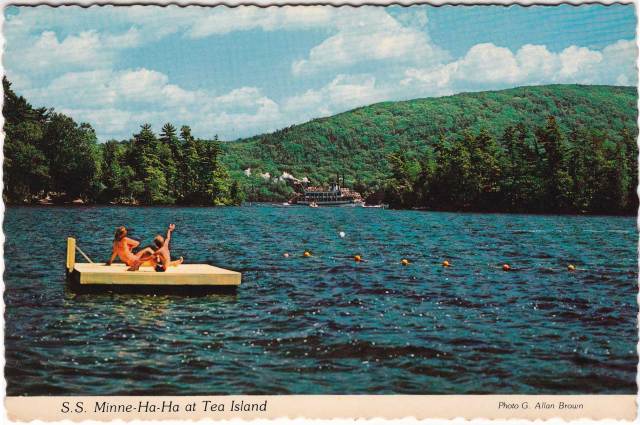 And there are more modern images; photo by G. Allan Brown

It’s a fascinating little island, and one can read much more in Trip Sinnott’s Tea Island: A Perfect Gem (1993); it’s available at Amazon.com. 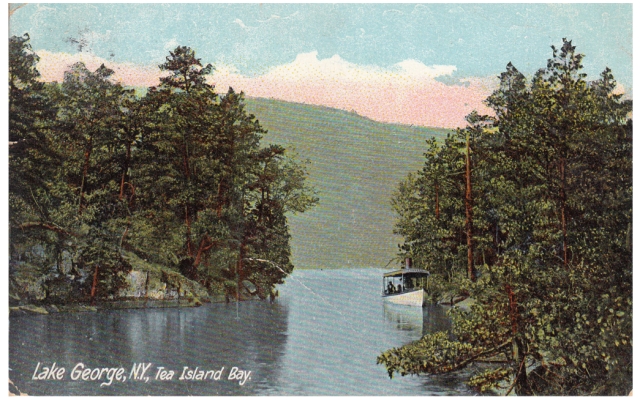 ← Cheese: From Sandy Creek to the White House
Pig Sticking →