A Puzzle from St. Stephen’s 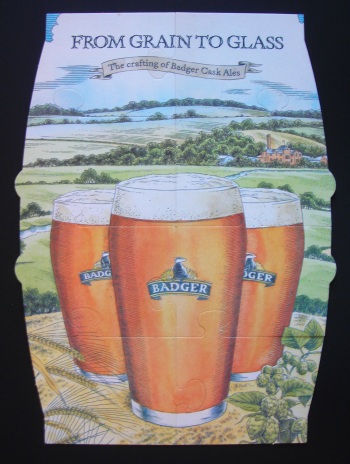 A few years ago, my sister-in-law Lee and her daughter, my niece Allyson, found themselves in The St. Stephen’s Tavern in London. You can see Big Ben out the window, and a bell rings two minutes before a vote so member of Parliament can dash back to be counted. At the time, Hall and Woodhouse, who own the pub and brew its beers, were producing a series of eight beer mats that could be pieced together like a jigsaw puzzle. Knowing my love of beer, Lee and Allyson were kind enough to begin roving from table to table to see if they could collect the whole set; the other patrons got into the spirit of the venture, and before long, the appropriate pieces of the puzzle had been assembled. They found their way to me and I finally found a frame large enough to do them justice. My thanks go out to St. Stephen’s, Hall and Woodhouse, and my saintly in-laws.

Do visit St. Stephen’s Tavern, virtually, if not in person, and Hall and Woodhouse, the brewery which produces Badger Cask Ales.

← Who to Believe?
Super Bowl Quandry →