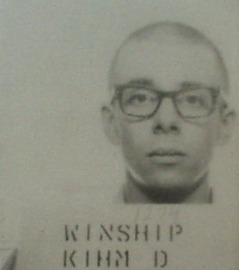 I was a draft dodger. I know this because early in Air Force Basic Training, as my aptly named “flight” stood in formation, my T.I. boomed out, “You are all draft dodgers!” None of us cowards said a word in reply, so it must have been true.

At the time, the summer of 1968, enlisting in the Air Force seemed a way to serve my country without dying immediately for somebody named Big Minh. My father was on my Selective Service panel in Buffalo, and he told me in no uncertain terms that I would be drafted, and soon. The Air Force recruiter was happy to see me.

Of course, history has shown me to be an idiot. I have since learned there were hundreds of easier ways to duck out, ways so legal and acceptable that I could have gone on to become President of the United States, for either party.

For the well-connected, miraculous openings appeared in previously full National Guard units. Dan Qualye, for example, was whisked into a unit that was actually barred by law from leaving Indiana. For those with humbler connections, there was improvisation. One of my high school friends cut off a toe with an ax. “Camping accident,” he said at the draft physical, after a long pause. That was good for a 4F, for sure.

Of my fraternity brothers, one was a sleepwalker in childhood and had a family doctor who did not want to lose a single patient to Vietnam. Two had asthma; they were delighted. Another had a heart murmur; he was delighted, too. Another confessed to some sexual predilections that were not illegal but definitely would have made Ozzie and Harriet Nelson blush. That worked for a 1Y, which was good unless the enemy landed in Florida.

One friend tattooed “F*CK Y*U” on his saluting hand. Another ran for eight hours before each draft physical, which wrecked havoc with the blood work; the last time, they called him at 10 p.m. and told him to report the next morning; he ran all night. Still another appeared at his draft physical in a toga, his brown skin painted white; he was arrested on the spot and sent to jail for indecent exposure, and thus picked up a criminal record which disqualified him for service.

An active young Republican I met while attending grad school deserves his own paragraph. During Christmas break of his senior year of college, he went to his draft board and voluntarily waived his 2S deferment. The next day, which was the next year, he automatically was rolled into a pool of those who had been 1A in the previous year. By law, no one in that pool could be drafted until all the eligible 1A’s from the new year were taken. “I would have served if called,” he told me, with a serious face.

The loopholes were there for the informed and influential, the connected and the crafty. But I must admit, I never thought any of us draft dodgers would run for office afterwards, but rather accept life itself as a sufficient reward and leave leadership to true patriots. But, to my astonishment, some of my fellow draft dodgers actually wanted power as well. And some are using that power to send a new generation of young men off to war, while at the same time disparaging the records of those who served in harm’s way in Vietnam. Go figure.

“Mr. Bush… managed to get into the cushy confines of the Texas Air National Guard at the height of the Vietnam War in 1968 – a year in which more than a half-million American troops were in the war zone and more than 14,000 were killed…

“Vice President Dick Cheney… asked for and received five deferments when he was eligible for the draft. He told senators at a confirmation hearing in 1989, ‘I had other priorities in the 60’s than military service.’

“Attorney General John Ashcroft. He is reported to have said, ‘I would have served, if asked.’ But with the war raging in Vietnam, he received six student deferments and an ‘occupational deferment’ based on the essential nature of a civilian job at Southwest Missouri State University – teaching business law to undergraduates.

“Paul Wolfowitz, the deputy defense secretary and a fanatical hawk on Iraq. He was not fanatical about Vietnam and escaped the draft with student deferments.”

Meanwhile, the details of George W, Bush’s entry into the Texas Air National Guard are public knowledge. Both Mr. Bush and his father, the former President, deny asking for help in finding a Guard opening. However, former Texas House Speaker Ben Barnes notes that he received a call from Sidney Adger, a Houston oilman and a friend of the elder Bush, asking Barnes to recommend the younger Bush for a pilot position with the Air National Guard. It was a service Barnes performed for the sons of many wealthy Texas families. Of this admission, Scott McClellan, White House spokesman, noted on August 28th, 2004, “It is not surprising coming from a longtime partisan Democrat.”

Notably, McClellan didn’t deny the truth of what Barnes said; he just redirected attention to the motives of the man who saved his boss’s life.

Photo above by an unknown photographer at Lackland AFB, taken for my DOD identification card, during Basic Training.

← Dark
The Ghost of Nancy Drew →