The first Oktoberfest was indeed in the month of October, hosted by Bavaria’s King Maximilian Joseph to honor the marriage of his son, Crown Prince Ludwig, to Princess Therese von Sachsen-Hildburghausen on October 12, 1810. After the couple exchanged vows, a public celebration was held in a meadow outside Munich’s Sendlinger Tor gate. The party went on for five days and the consensus afterwards was that everyone had a pretty good time. So when it came time to celebrate the royal couple’s first anniversary, an encore seemed natural and the royal family sprang for another party.

The city of Munich eventually assumed responsibility for the annual festival, but it was Bavaria’s daunting autumn weather that changed its opening day. In 1872, after too much cold rain and early snow, officials moved the celebration back into September for more pleasant weather. And there it remains. Today, the Oktoberfest begins on the second-to-last Saturday in September, runs 16 days, and ends on the first Sunday in October.

And now onto the matter of the festival’s traditional beer, Märzen, named for the month of March (März). In the years before refrigeration, brewing during summer, with its higher temperatures and yeast-filled air, led to uncontrollable fermentation and spoiled beer; summer brewing was thus forbidden by the authorities. To tide the populace over, beers for summer were brewed in March or April and laid down in barrels inside ice-filled caves to be drawn upon during the warmer months to come. In addition to the cooler temperatures below ground, the beers benefited from more alcohol and more hops, both of which acted as preservatives.

In the caves, the beers rested, composed themselves and mellowed until they were called upon in August. The technical term for this storage was lagering, which eventually gave its name to an entire class of beers, lagers, whose yeast prefers to work at cooler temperatures and settle to the bottom, resulting in a clearer, brighter beer.

But these summer beers were still not the classic Märzens that have come to be associated with Oktoberfest. They were darker beers, today known as dunkels. It was not until 1871 that Munich brewer Josef Sedlmayer tried brewing a lighter, copper-colored beer, based on a style his son Gabriel had learned about in Vienna, only heartier for the Oktoberfest. The first attempt was well-received among friends, but Josef had doubts about its public acceptance.

The weather in 1872 provided the decisive push. The summer was a hot one, and supplies of the summer’s usual dunkel lager ran out before Oktoberfest. One banquet hall host, Michael Shottenhamel, was afraid to replace his supply with the yet unlagered winter beers, with good reason, but his friend Josef revealed that he had a supply of a new, copper-colored Märzen beer.

Shottenhamel agreed to sell the beer and the new Märzen was judged to be outstanding, quickly becoming the model for every Munich brewery’s Oktoberfest beer. Sedlmayer’s brewery, today known as the Spaten brewery, still brews the original, Spaten Ur-Märzen (“Ur” means “original.”)

Oktoberfest has been canceled 24 times, twice by cholera epidemics (1854 and 1873), once in 1870 for the Franco-Prussian war (causing thirsty Bavarians to carp that this Prussian conflict had nothing to do with them), and in the years during and after World War One and Two. (Wars are always bad for beer, which seems reason enough not to have them at all.)

Hitler never attended Oktoberfest; he was leery of the whole idea, as he was with Christmas. But his influence was felt: During the Nazi era, Löwenbräu was disparaged as Judenbier (Jews’ beer) because one of the brewery’s owners, Joseph Schülein, was Jewish. (It did not matter that Schülein did not play an active role in the brewery; he spent most of his time at his farm at Kaltenberg Castle and died there in 1938. Soon after, his son was held briefly at Dachau, and the family fled to the U.S.A.) 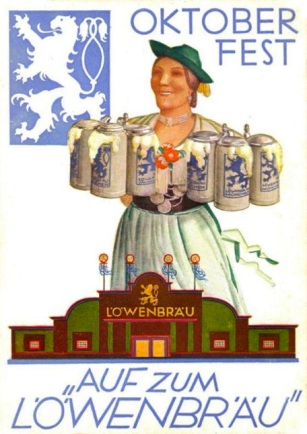 The locals judge the best tent and the best beer to be Augustiner — where the beer is still served from traditional wooden kegs — and the best time to attend would be a weekday afternoon when one is least distracted by crowds, noise and mayhem. Not to suggest that people drink to excess, but there is actually a word for those who have passed out, Bierleichen, German for “beer corpses.”

In 2000, health-conscious Oktoberfest revelers ate only 235,474 pairs of pork sausages (down from the record 903,474 in 1966) but chicken consumption was up to 681,242 halves. And last year, 94 oxen vanished at Oktoberfest without even a postcard to their brethren.

Lost and found items include wheelchairs, baby carriages, crutches and dogs. There are 83 public telephones, 770 bathrooms and 2,000 feet of urinals. Of the peripheral amusements, the most highly recommended is the flea circus, in which fleas have been trained to draw carriages, dance in a tutu and play soccer. 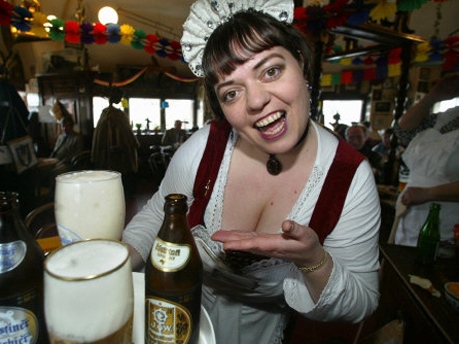 This piece was written for the Syracuse New Times in 2001 and has been revised often.