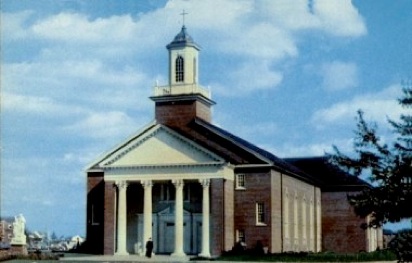 I was raised as a Baptist, in a house across the street from a Roman Catholic church. Every day I marveled at the Catholics I saw, how different they were. The Baptist faith of my youth was cut from plain cloth, with simple rules: Everything I did or thought of doing was wrong, and I was going to spend Eternity in a lake of fire. On the other hand, we ate meat on Friday with impunity. What funny rules the Catholics had.

They also had a bowling alley. In fact, they had a whole block of Kenmore, with an old church, a graveyard, a convent, a big new church and rectory, a school, and the bowling alley, where they served beer. As Baptists who never drank in the presence of other Baptists, we looked down our noses at a church that would sell beer.

One day, forever engraved in my memory, the bowling alley ran out of beer. When the bowlers heard that a beer truck was on its way, they gathered outside, and as the truck pulled in they raised a lusty cheer, jumping up and down, arms waving. So un-Baptist.

Speaking of amusements, the older boys, Protestants and Catholics alike, ordered pizzas for the nuns living in the convent, and watched the ensuing deliveries with considerable mirth. But no one made fun of Father Klauder. We loved Father Klauder.

On sunny days in the 1950s, his black priestly robes rippling in the breeze, the Right Reverend Monsignor Charles A. Klauder played baseball in the parking lot with the neighborhood boys. When pitching, he didn’t so much throw the ball as serve it up, so the hitter might do his best. With the bat, he had a smooth but gentle swing.

In my youth, I thought his name was Father Clouder, because that’s how it was pronounced. Whenever we walked by, he smiled at us and waved, and we waved back. He was a nice man. Not a stern authority figure, but rather someone who glowed with kindness.

His example, perhaps, was the first that nudged me towards becoming more open and ecumenical in my religious journey. I certainly needed a lot of work, and many more mentors, but Father Klauder was the first to give me pause for thought.

Below, a photo of Father Klauder with Pope Pius XII, February 1958.