“It was recognized even in the eighteen-sixties that collectors had to contend with not only forgeries of government-issued postage stamps but also stamps whose validity existed only in the imagination of their producers.”– Cinderella Stamps (1970) by L.N. and M. Williams

I love mail, mail art, the post office, postage stamps, rubber stamps. All of it. Mail art is a genre of works sent through the mail, with the postal journey and markings being a part of the process. Mail art is meant to be shared, rather than sold; it’s whimsical and surprising.

And in a corner of mail art, you will find faux postage — artistamps, timbres d’artistes — stamps that mimic postage but serve another purpose, whether artistic, political or simple amusement.

An important ancestor of faux postage is the poster stamp, introduced in Germany circa 1907 to popularize a food company’s brands; other companies followed suit and soon these Reklamemarken became popular all by themselves. Lick ’em, Stick ’em: The Lost Art of Poster Stamps (1989) by H. Thomas Steele is a fine history of the genre and a visual feast.

In the 1980s, I dabbled in mail art, decorating envelopes and postcards with rubber stamps and colored pencils, but parenthood prompted me to pause for a time, an artistic dry spell that stretched out to 30 years.

But as retirement loomed, I was prompted to pick up where I left off, and the stamp itself — faux postage — became my focus. My Photoshop skills rose to a point where I could create images I was happy with and then I found a FISKARS scissors that mimics postal perforations, a discovery of Holy Grail magnitude. (Some artists use an un-threaded sewing machine to make the perforations, but I need my fingers to type.) 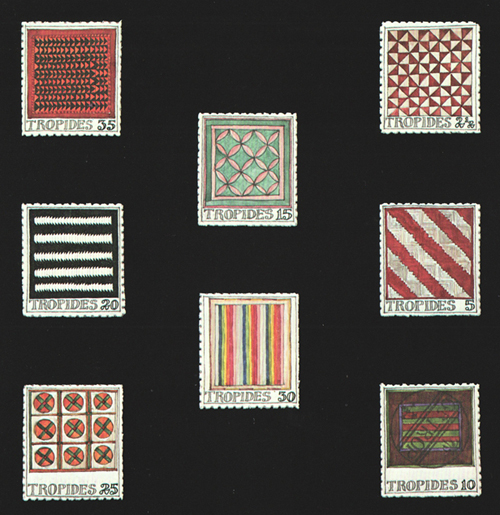 Early inspiration came from an artist named Donald Evans (1945-1977), who between 1971 and 1977 hand-painted thousands of postage stamps from countries existing only in his imagination, collected in The World of Donald Evans (1980) with text by Willy Eisenhart, a “must have” book for anyone with an interest in mail art.

My plunge into faux postage was also inspired by Henry Denander, whose Chet Baker stamp sheet you see above, and aided by “how to” posts by Lisa Vollrath.

I do not have their talent — my drawing is confined to stick figures — but I enjoy combining classic borders of old stamps, found via Google Images and Pinterest, with photos and illustrations that have nothing to do with them. Really, who wouldn’t want a One Centavo Keith Richards in their collection?

The term “artistamps” was coined by Michael Bidner (1944-1989), a Canadian multimedia artist and stamp collector. An article in Linn’s Stamp News (“Artistamps combine art and philately” by Denise McCarty, May 28, 1984) noted that Bidner was staging an exhibition at a gallery in London, Ontario, that would include more than 7,000 artistamps from 1,000 artists representing almost 50 countries.

John Tingey, in The Englishman Who Posted Himself and Other Curious Objects (2010) dates the beginning of mail art to the early 1840s in England, when individuals, inspired by the first illustrated envelopes issued by the British post office, began decorating envelopes with their own designs. 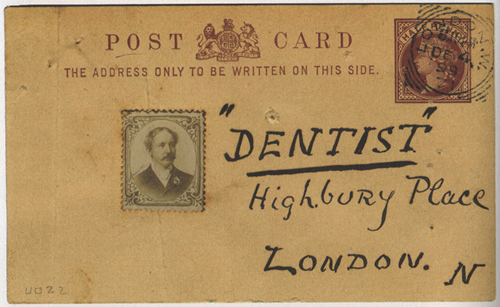 Tingey’s book also includes the postcard above, with a “publicity stamp” as part of the address. The addressee was G. Forster, a dentist who used a photostamp to publicize his practice, and also a cousin of Reginald Bray, the above-noted Englishman who delighted in sending cryptic postcards. At this time, photostamps were also popular in Germany.

Other sources of early (and contemporary) mail art include:

In 1965, Gerald M. King of London began creating Alice in Wonderland stamps and covers, collected by King and Paul Jennings in Alice Through the Pillar-box (1978).

Timbres d’artistes, published in 1994 by the Musée de La Poste in Paris, includes scores of sheets of artistamps from the “Mail-Art” movement that began in the 1960s. Below, a 1985 stamp sheet from Carlo Pittore, from the collection of Tom Bryan. 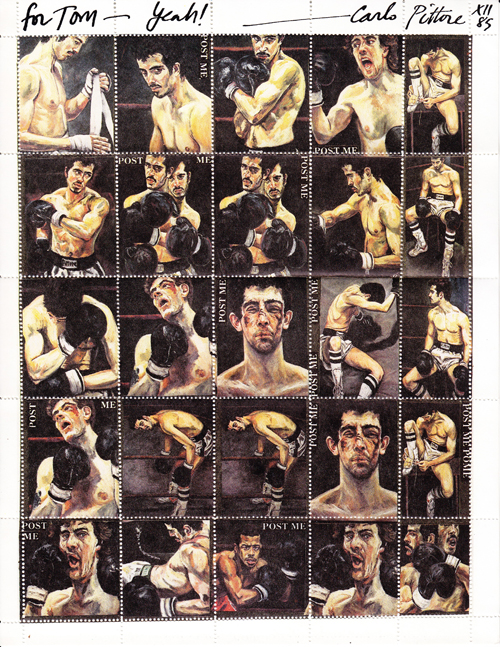 Another creator of faux postage is Eric Whollem whose The Mermaids of Amphora (2000) included individual stamps, their backstories and this note: “My own cinderellas were created as an entertainment — to explore the potentials of graphic art in miniature.”

Note: Posting faux postage is legal, provided official postage is also affixed to the envelope or postcard, and the faux stamp itself is not likely to be mistaken for a genuine postage stamp.

In rare instances, the legality of faux postage has been challenged. In 1999, a Kansas artist was warned about creating counterfeit postage stamps; local authorities cited Federal statutes under Title 18, U.S. Code, Section 501, prohibiting the making of stamps “of the kind or type authorized by the U.S. Postal Service,” with a penalty of a fine and/or imprisonment for not more than five years for each piece of mail placed into a mailbox. (Nothing came of it. See The Stamp Art and Postal History of Michael Thompson & Michael Hernandez de Luna (2000) by Michael Thompson for details, plus contemporary histories of artistamps and mail art by James Warren Felter and Simon Anderson.)

However, in a more extreme example, in 1977 artist and poet Clemente Padín of Uruguay created stamps that satirized his nation’s military; he was arrested, tortured, charged with “attacking the morale and reputation of the army,” and spent two years in jail before his release through the intervention of U.S. and French diplomats.